RED & WHITE: This can be a mahogany to a flame orange. With white cheeks, white marking on the feet going up as far as the knees, a cream or white underbelly and often on the tail. This is the most common and is really what gives the shiba the reputation of being a fox due to the striking white contrast markings. White on the body and/or too far up the legs is highy undesirable and considered a mismark 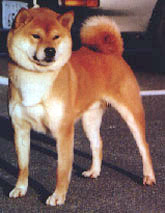 RED SESAME: This is the rarer of the colours, hard to describe and can be very stunning. The dog is  as a red or red and white. The difference is each hair on the dog is tipped with black. This gives a most amazing black finish to the dog which, when you brush the coat the wrong way shows the red beneath. 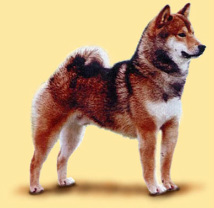 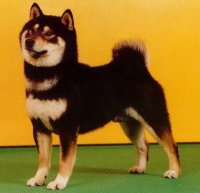 A BLACK / TAN a stunning colour which in reality should be tri colour. The red has been changed to a  black coat, with white on the feet, cheeks, a dash above each eyebrow and on the end of the tail. Also white "dickie bow tie" mark on the chest. Between the white and black there is a hint of tan 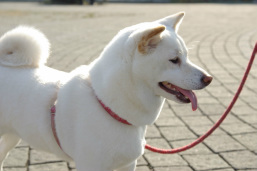